With a mission to boost the energy and enthusiasm at over 75 University of Utah sporting events a year, the U Spirit Squad is expert at supporting others through their time and talents. So it comes as no surprise that when they took the stage this summer over 6,000 miles from their home courts it was in service to the next generation of performers.

This is the third year that coach Jamie Duncan Plott and members of U Spirit Squad have traveled to China as special guest instructors at a cheer and dance camp hosted by Beijing Normal University. Held at locations throughout the country, the week-long camp brings nearly 300 children aged 10-15 years from all over China to elevate their performance skills. 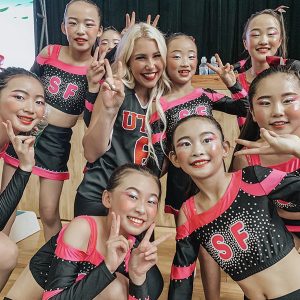 The guest teaching invitation grew out of the Office for Global Engagement’s innovative China Coaches program, which brings coaches and sports teachers from universities across China to study with University of Utah Athletics coaches and College of Health faculty. Participants stay at the U campus for three months to complete training in coaching technique, team building, recruiting, sports nutrition, sports psychology, and injury prevention. In 2016, cheerleading was a featured discipline in the program and connections were made that have taken the partnership to new realms.

Since then, the U Spirit Squad has taught in Baotou in Inner Mongolia, Guiyang in Southwest China, and spent this year’s trip teaching in Datong–a city known for its ancient Chinese Buddhist temple grottoes.

During their downtime, the nine U students visited the famous grottoes, along with the Hanging Temple, and the Great Wall. “This was my first time out of the country,” said sophomore Jessica Murry. “It was cool to get such a big opportunity, especially since Utah can be kind of a bubble.” Murry was struck by visiting historical sites that she had studied in Art History. “Suddenly, I’m standing right in front of what I’ve only read about,” she said. “It was amazing.”

Duncan Plott has seen students experience that awe before and noted that this trip is a first-time international encounter for many participants. “Most never dreamed they would ever go to someplace as far as China. It’s unreal for them. They come back with their eyes opened to really loving other cultures.”

For senior Kylee Sainsbury the highlight of the experience is “definitely the teaching. And seeing the kids with their phones out taking pictures and asking for our autographs–we feel famous.” Sainsbury has traveled with the team to teach twice now. “It’s such an honor,” she said. “I’m so grateful and humbled to be part of this program.”

When asked if it was difficult to teach across a language barrier, sophomore Bella Fanelli-Poole noted the beauty of their shared discipline. “We didn’t need to speak–we could bond over dance.”

On Sept. 18, the Office of Global Engagement at the University of Utah will welcome 70 collegiate coaches from China to participate in a training and education program for three months. Sponsored by the China Scholarship Council and the Federation University Sports China, the coaches will work with U athletics staff on techniques in men and women’s basketball and track and field. This will be the second year the U has participated in the program, which is part of the Pac-12 Globalization Initiative.

This past July, in preparation for the 2017 training program, 175 university coaches from across China gathered in Guangzhou, a historic port city in the southern part of the country, for a month-long intensive English program. Midway through the program, representatives from the U traveled to Guangzhou to meet with the new cohorts of coaches.

“This trip allowed us the ability to convey our expectations to the coaches directly, hopefully avoiding any ambiguity,” said Scott McByrne, director of administration and video for U Athletics. “We had an open discussion with the coaches and let them describe to us what they wanted to accomplish in their time in the U.S. Having this head start is essential in making sure we get the weeks set up accordingly with lectures, guest speakers and hands-on court demonstrations and really keying in to what both parties are looking to get from the other.”

Last year, the U hosted 89 high school coaches. Having a chance to meet each coach, give presentations, discuss curriculum, tour athletic facilities and get a better understanding of what the coaches hope to get out of the experience was beneficial for both U staff and the coaches.

“The trip helped us feel better prepared for the new set of coaches arriving in September,” said Kendall Rodriguez, women’s basketball director of marketing. “Last year, we really didn’t know what to expect in regards to coaching ability, overall understanding of the game and English comprehension. Being able to travel to China to meet personally with the coaches we’ll be working with for three months was incredibly helpful as it gave us an idea of who they are both on and off the court, what their expectations are, and most importantly, what athletic resources and competitive standards they have at their respective universities compared to ours — this will help us better cater our curriculum to them while they’re here.”

The training program will focus on coaching strategy, game preparation, film review, assistant coach development and practice structure. In addition, the curriculum will include off-the-field topics such as sports psychology, strength training, nutrition, public relations and marketing. Following the program, each participating coach will be issued a certificate of completion.

Along with McByrne and Rodriguez, representatives from the U included Rachel Messer from women’s basketball, Courtney Jost from track and field and Tami Johnson from swimming. Also participating, Cheri Daily, program director for the China coaches training program and Esther Trueman, program assistant.

As a conference wide initiative, Arizona State University will also work with college coaches from China this fall.

Campus partners contributing to the success of this program include the Office of Global Engagement, Athletics, the College of Health, the Department of Linguistics and the Guest House and Conference Planning Services.

“I want to see my grandmother again,” says Leng Mei softly, as a translator interprets.  “My grandma died before she could meet my son.” Leng Mei’s son, Ye Leng Xi, is nicknamed Tutu and loves to draw animals, especially bears and frogs. He is three years old.

Family is very important in Chinese culture; it is customary for the grandparents like Leng Mei’s to raise their grandchildren while the parents work to become the best versions of themselves that they can be.

And Leng Mei has truly become the best version of herself. The Asian record holder for the 400-meter sprint and 100-meter hurdles, she’s lived up to her name. In Chinese, Leng Mei means to be proud of yourself and not care what people say, for you will get everything you wish for.

And her wish has come true. One of 89 coaches who participated in a three-month cultural exchange and residency program at the University of Utah, Leng Mei’s path to stardom was pre-destined. When she was in first grade, her Physical Education teacher sensed a latent running talent and later encouraged her to try to get into the top middle school in the China.

“I am so grateful for him. He changed my life and launched my career in track and field.” Leng Mei began training as a runner at seven years old, running an hour a day, and later trained four hours each day of her 11-year professional career. “My favorite feeling is surpassing my opponent. It’s like a drug for me!”

Throughout her running career, Leng Mei kept in touch with her old coaches; a few years ago her high school coach invited her to be a coach herself in her alma matar. He also taught her the most valuable lesson of her life: “Never give up. Do everything with utmost confidence. Have a good beginning and a solid ending.”

“I didn’t want an ordinary job or to have an ordinary life. I wanted to do something I love. So I decided to be a coach,“ Leng Mei says. Leng Mei now coaches 22 female runners in middle and high school in her hometown in Sichuan Province.

The biggest differences between the Chinese and American ways of coaching, she says, is how detail-oriented American coaches are, and how focused on the individual. Before she came here she thought it was impossible to take care of each athlete, but here she sees coaches paying attention to each athlete at each of their events; they place a premium on the athletes’ psychological health, or even the brand of their shoes. “There is a certain professionalism that I love. It’s very evidence-and knowledge-based. And the athletic facilities are much better than in a Chinese college.”

So what are the biggest differences between American and Chinese ways of playing a sport and coaching? “Sports are more relaxed in China. People there are not as passionate about sports, and don’t hold themselves to as high of a standard. Here, I’ve seen an athlete cry when he won a first place championship because he still didn’t do his best and knew he could do better. “

An only child nestled in a country of only children, Leng Mei was born to a father who was a rubber factory worker and a mother who owned a clothes shop. Her father’s job disappeared one day, forcing him to help Leng Mei’s mother with her clothing business after the factory’s boss ran away with all the factory’s capital. When Leng Mei had her son, her mother closed the store; her father and mother now care for him while Leng Mei works. But Leng Mei wishes to make some changes upon returning to China: “I want to adopt the American or Utah way. I go hiking and see all these pregnant women, or women with little children in tow. In China, the weekends are for personal rest and rejuvenation, but I like that here, free time is reserved for the family; they spend quality time with their children. I want to do the same with Ye Leng Xi.”

It is clear that Leng Mei is very fond of Salt Lake City. “There are no skyscrapers like the other big cities I’ve visited [while being in the United States]. But whenever I come back to Utah, I feel like I’m home.  The city is so very clean, the school is clean, even the windows are washed regularly. I saw a cleaning lady on her knees washing windows! I didn’t know that people could be that dedicated to their job! People in Salt Lake City are very friendly and say hi on the streets. While they’re in their cars, they even roll their windows down to say hi!”

And she also sees a lot of similarities between her people and those living here, on the other side of the world. “Both Americans and the Chinese care deeply about sports and are very competitive. And deep inside, we want to communicate with each other. This earth is so big, if you have just one country in charge, it’s too much for just one. But if strong countries [like China and the United States] work together, there is synergy and more efficiencies with better results. We are stronger, together!”