In partnership with the Utah Olympic Legacy Foundation, the U welcomed 10 members of Ukraine’s National Curling team to campus housing for the summer. This all-encompassing humanitarian and sporting initiative aims to provide a safe haven and training opportunities amid unrest and turmoil in the team’s home country.

The nine athletes and their coach arrived in Salt Lake City on May 10, before moving on campus.

Over the next three days, the team toured their on-campus residence hall, the Student Life Center facilities, various dining locations including Kahlert Village and the Student Union and the services available to them at the J. Willard Marriott Library. The week finished with a welcome breakfast held at Rice-Eccles Stadium.

The athletes toured the Student Life Center with wide eyes, smiles and visible excitement at the quality of the equipment. The tour of the J. Willard Marriott Library was met with similar excitement when shown the breadth of services such as computer labs, gaming systems and podcasting equipment they are able to utilize during their stay. And they didn’t want to leave the football field when touring the stadium.

As a leader in both Olympic and Paralympic sport and championing the resettlement of refugees from around the world, Utah is uniquely qualified to provide world-class training and stability to these athletes, coaches and family members. An estimated 65,000 refugees, former refugees and their children live in Utah, according to a 2021 Utah WorkForce Refugee Services report. Athletes from over 30 countries train or compete in the state each year.

“Utah has a long and proud legacy of welcoming refugees to our state,” said Utah Gov. Spencer Cox. “This is an incredible opportunity to support our Ukrainian friends in pursuing their goals in sport and life.”

The second group of approximately 40 athletes, coaches and family members arrived in June with housing and freestyle skiing training at Utah Olympic Park along with additional training resources at the USANA Center of Excellence. Freestyle skiing encompasses the disciplines of aerials, moguls, freeskiing and ski-cross combining traditional skiing with acrobatics. 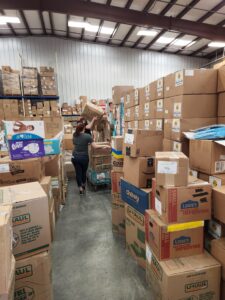 Every aspect of the group’s transportation, lodging, training and meal costs is fully covered for the duration of their stay through a public and private fundraising effort organized through the Community Foundation of Utah and Utah Olympic Legacy Foundation. Both organizations are working closely with Sergey Bubka—a four-time Olympian, Olympic gold medalist and senior vice-president of World Athletics and president of the National Olympic Committee of Ukraine—to ensure all of the athletes’ needs are met.

Through generous contributions, including the $200,000 pledge from the Larry H. & Gail Miller Foundation as well as private donations from Matthew and Tatiana Prince, all contributions from the public will be matched up to $400,000—providing a potential $800,000 for the Ukrainian group.

Also this spring and summer, Dr. Bogdana Schmidt of University of Utah Health led a collaborative effort with the Office for Global Engagement to collect supplies for direct shipment to Ukraine amidst the athletes’ arrival. Over the span of four months between March and July, 1,100 boxes were collected from various campus locations and stored in the Carolyn & Kem Gardner Commons building, as well as in Dr. Schmidt’s own home.

Schmidt remarked that the endeavor received overwhelming support, for which she will be forever grateful. “I can’t help but think how many kids will be receiving this aid gathered by our community and how impactful it will be on their lives and in restoring their faith in humanity,” said Schmidt. 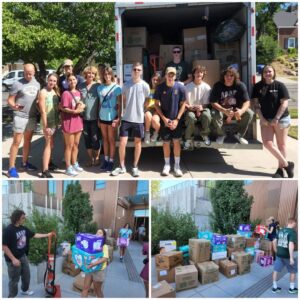 On July 13, 2022, the curling team helped load the last shipment of 155 boxes into a moving truck to send to their home country, offering an emotional conclusion to Dr. Schmidt’s and the Office for Global Engagement’s supply drive.

“I believe it’s very natural and appropriate that Utah steps up and supports Ukraine’s winter sports teams,” said Utah Olympic Legacy Foundation CEO Colin Hilton. “We have amazing resources and a caring and hospitable community that knows when there is a need we can help with, we do something about it. Our Legacy Foundation looks forward to coordinating services for these young athletes, coaches and family members from Ukraine.”