A wish for world peace is often uttered as a naive hope for the impossible, but Professor Deen Chatterjee, Faculty Affiliate at the Oxford Consortium for Human Rights at the U, would argue that world peace is attainable when we shift our mindset to accomplishing it. 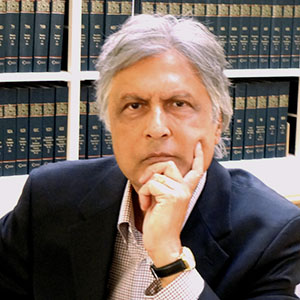 Chatterjee offers Ireland’s recent successful bid for a rotating seat on the UN Security Council as evidence of a global appetite for alternate approaches to peace that are enduring and active—more than just the end of conflict. Chatterjee’s research played a supporting role in Ireland’s victory and, though Covid restrictions prevented him from attending the formal celebration in Dublin, he is gratified to see the approach so publicly endorsed on the world stage.

“We cannot think of peace as a resting state or absence of war,” says Chatterjee. Ireland ran their campaign for the UN seat on the idea of global security by way of sustainable development goals (SDGs), leaning heavily on SDG16—peace, justice, and strong institutions. These global goals promoting just, peaceful, and inclusive societies were set in 2015 by the UN General Assembly as a way to achieve a more equitable and sustainable future for all.

The active pursuit of the SDGs toward global peace offers a marked difference from a traditional view of “war readiness” as a plan to reinforce peace.

“We have to rethink this strategy of global security. We cannot simply think of peace in terms of war. This war-ready mindset makes us live in perpetual fear. We end up being a security nation, which is not conducive to peace or national health. We need a shift in our thinking that would prioritize proactive policies of peace over a reactive path to war,” said Chatterjee. He proposes an approach called “Just Peace as Preventive Non-intervention” and has championed the concept through lectures, books, and articles all over the world.

Over the past two decades, Chatterjee has delivered ideas on this theme as an NEH fellow at the US Naval Academy in Annapolis, through his role as a Faculty Affiliate at the Oxford Consortium for Human Rights at Oxford University, as a Trustee of Pax Natura Foundation in Costa Rica and Cuba, and in Japan as a Carnegie Council Fellow, among other appointments.

Chatterjee spoke on the topic in Dublin in 2017 on behalf of Ireland’s Ministry of Foreign Affairs and the Trinity International Development Initiative (TIDI) at Trinity College in a lecture series aimed at showcasing the Irish strategy toward the UN Security Council seat. He believes that it’s “high time that we shift our discourse from finding security in resorting to a just war to building security via a just peace.” It’s a nuanced perspective shift, but he explains it as, “a prospect that is far more achievable and less costly in lives and resources than the current practice of perpetual war for perpetual peace, which has taken us nowhere near peace.”

The study of peace and, more broadly, human rights and global justice, has been the focus of Chatterjee’s life’s work. As a former philosophy professor at the U and then a senior fellow at the S.J. Quinney College of Law, Chatterjee sees his work as a continuation of the formative years of his student days. Chatterjee came of age on the West Coast as an activist during the tumultuous days of the late sixties, protesting the Vietnam war and participating in peace efforts.

When asked why he has spent so much of his life focused on researching peace, Chatterjee replies, “We have to be proactive, engaged, and relevant in this world. What can be more fulfilling than finding ways to make this planet a better place for all its inhabitants? We all need to find our own ways to go about it.”