Mechanical engineering student Katie Bezdjian has received a Fulbright Award. As part of the award, she will spend a year abroad where she will be studying thermophotovoltaics alongside researchers at the Solar Energy Institute at the Technical University of Madrid in Spain.

The Fulbright program is an international educational exchange program designed to build relationships between people in the U.S. and around the world with the aim of solving global challenges. The program is funded through the U.S. Department of State and grant recipients are selected based on academic and professional achievement as well as a record of service and demonstrated leadership in their respective fields. 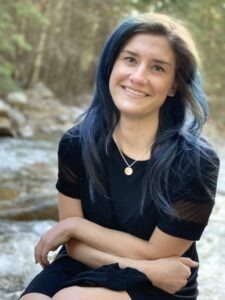 Bezdjian just completed her M.S. thesis, which focused on characterizing a high-temperature paint called Pyromark 2500, which is often used as a receiver coating in concentrated solar power systems. The paint can maximize the amount of solar energy absorbed by the receiver, which improves the efficiency of the entire solar power system. Her research involved both physical experiments and computer modeling to study the evolution of Pyromark’s radiative properties due to high-temperature exposure.

“I view renewable energy engineering as the perfect integration of my academic and personal interests,” said Bezdjian. “I’ve always gravitated toward thermal sciences, and I’m deeply passionate about nature conservation.”

Bezdjian’s Fulbright grant is focused on thermophotovoltaics (TPV), a type of solar energy technology. TPV devices include a heat source that emits thermal radiation toward photovoltaic cells, and then the photovoltaic cells generate electricity. TPV cells have the potential to reach high efficiencies—researchers at the National Renewable Energy Laboratory and Massachusetts Institute of Technology recently developed TPV cells with efficiencies higher than 40%. Bezdjian will study a novel TPV device fabricated from germanium alongside researchers in Spain. Specifically, she will focus on modeling the TPV device and measuring the thermal conductivity of the device’s components. This is one piece of a larger three-year grant. Researchers in Spain have already begun work on aspects of the project and will continue to work after Bezdjian completes her time.

“I’m very excited about the collaboration aspect,” said Bezdjian, “as well as expanding my knowledge of solar energy technologies.”

Bezdjian is graduating this spring and will leave for Spain later this year.

“I want to thank all of the professors I’ve had the privilege of learning from during my time at the U,” said Bezdjian. “I wouldn’t have the knowledge or the capabilities to pursue this opportunity if it weren’t for them. I’d especially like to thank my master’s thesis advisor, Dr. Mathieu Francoeur, for introducing me to the PI I’ll be working with while in Spain and Dr. Sameer Rao for his support in my application. I feel fortunate to have such a wealth of support in this department.”