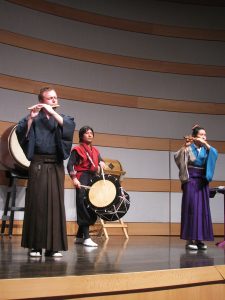 This is me, my flute teacher Miwako Mori, and Takahito Nishno (drum), performing a concert together at the Salt Lake City Library on the night of my graduation from the U.

My Learning Abroad year at Kansai Gaidai in Osaka, Japan was fun, magical, and filled with personal and academic growth. It also launched me into incredible junior and senior years at the U, and a wonderful international career.

But my relationship with Japan didn’t start there—it has spanned most of my life.

I first encountered Japan as a child when my mother told me about the performance art of Yoko Ono. I became transfixed and would beg for “Yoko Ono bedtime stories.” I was delighted by the innocence, absurdity and unbridled expression of her work. As I engaged with her art more deeply, I uncovered themes of love, healing, and imagination. Her compassion and avant-garde spirit are part of the Japan that I have come to know.

My family hosted many homestay students from Japan and formed dear, long-lasting friendships. This led me to study Japanese language in high school, where the dedication and humanity of my teacher continued to steer my life.

After becoming a student at the U, I enjoyed the language programs, and also started an exploration of Japanese performance arts and movement with Dr. Jerry Gardner--an expert in avant-garde Japanese performance in the Theatre department. This relationship would eventually culminate in my graduation thesis for Asian Studies.

I studied in Japan for my sophomore year. It was so rewarding to use my Japanese language skills to support new endeavors, and I soon found myself involved with local performing artists and absorbed in training and performing together.

Learning abroad allowed me to engage with another culture and new people on my own terms. It’s rare to be so fully immersed in the purpose and responsibility of learning, interacting and simply experiencing.

When I graduated and decided to pursue a career in Japan, I had an entire community waiting for me. That support was crucial to my professional success. (My bamboo flute teacher in Kyoto even traveled to Utah and we played a concert together on my graduation night.) 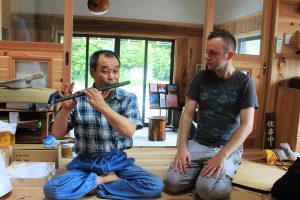 This is me and Ranjo-san—a famous and beloved Shinobue (Japanese transverse bamboo flute) craftsperson. He is playing an instrument made out of smoked bamboo that is over a century old. He later gifted me the priceless instrument.

I enjoyed a very satisfying career in Japan for nearly a decade. I worked for the Wakayama City Hall International Affairs Division, managed and taught educational programs, provided support to the international community, and coordinated sister city exchange programs. Later, at the Kyoto Convention and Visitors Bureau, I acted as Kyoto’s spokesperson to the international meetings industry, working in close collaboration with government, local and global business partners, and Japan’s leading universities to bring large academic conferences to Kyoto.

I am excited to come full circle and bring what I’ve learned back to the U’s Office for Global Engagement. I can offer understanding and empathy around what it’s like to be an international student, and aim to help the U be a safe place for our diverse community to learn together.

I hope that all students will reach out to the world, form meaningful connections, and nourish those influences for their entire lifetime. Engaging with the world makes us better students, better professionals, and better people.

Matthew Stevens is Project Coordinator for the Office for Global Engagement. He recently moved back to Utah (a harrowing journey, given the pandemic) after working in Japan for eight years post-graduation.