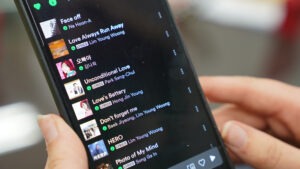 “When I listen to trot music, I get excited. I’m studying abroad to learn Korean”

“My name is Lilly. I came to the University of Utah Asia Campus in Incheon to learn Korean. I like Trot songs.”

The blue-eyed American with immaculate Korean fluency is Lilly Ann Martinescu, 19, a student at the University of Utah Asia Campus located in Songdo International City, Incheon.

Lilly hails from Albuquerque, New Mexico, which is mainly known in South Korea as the set of the global television phenomenon Breaking Bad. Her Korean is excellent. She speaks, writes, and understands most conversations accurately.

“The sentence ’I love you’ in Korean can be expressed in many different ways but convey the same meaning. That idea was really interesting to me.”

Born to an American mother and a father who immigrated from Romania to escape political pressure from the former Soviet Union, Lilly was homeschooled since the age of 12. Under the influence of her mother, who worked for a travel agency, she began studying languages from around the world. “I learned Romanian from my father, and I was able to learn Spanish naturally because my hometown borders Mexico,” says Lilly, “I also learned Japanese by watching Japanese animation and dramas, and I learned Korean for the first time as I fell in love with the charm of Korean pop.”

“A lot of my friends like Korean pop artists like BTS, but I like Korean Trot music. I get excited when I listen to it. I’ve watched every single TV Trot contest.”

Lilly’s main reason for choosing to attend the University of Utah was because of the Asia campus in Korea. After learning that the U’s Global LEAP program allows first-year students to study in Korea for a semester, she submitted her application without hesitation. The added bonus of being able to take Chinese and Korean classes in addition to meeting various students from around the world at the Incheon Global Campus gave her even more reason to apply.

“I initially enrolled in the Salt Lake City campus, but I’m officially transferring to the Asia campus next semester. I want to continue studying in a global environment.”