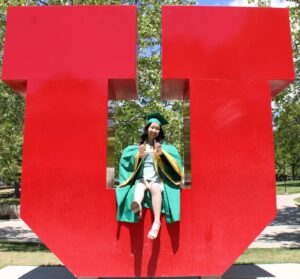 Christina Nguyen ’25 is a recent graduate of Kearns High School in Salt Lake City, and is now a psychology major at the University of Utah. But unlike most of her peers who joined her in this year’s freshmen class at the U in Salt Lake City, Christina paved her own path by starting directly at the U’s Asia Campus in Incheon, South Korea in the fall of 2021.

During her time at Kearns High, Christina was not even considering studying abroad. However, when she happened upon the U Asia Campus through the U’s website, she knew the international experience was exactly what she wanted.

“I had been in Utah my whole life and I wanted to experience something different” says Christina, “being able to experience and live in another country is something most people don’t get to do. The U Asia Campus allows you to pursue a U.S. degree in South Korea, which really appealed to me.”

Other unique aspects of the U Asia Campus – smaller class sizes, weekly on-campus events and individual attention from faculty members – solidified her decision to begin her university career in South Korea. Added perks such as safety, ease of transportation and the country’s beautiful sights, Christina mentions, were pleasant surprises.

Christina admits studying in Korea came with its challenges as well. The culture shock of moving to a country halfway across the world, paired with the sudden push from the comfort of home to complete independence were difficult for Christina at first.

Even so, Christina was determined to make the most out of her experience at the U Asia Campus.
Seeing opportunities to be more involved in the campus community, she now works as a student ambassador for the admissions office, promoting the Asia Campus to prospective students. She also works as a floor representative in the Incheon Global Campus dormitories, coming up with events and offering support for her dorm’s residents.

Outside of school, Christina is learning as much about South Korea as possible. Trips to Busan, Jeju Island and Geojae Island are marked in her planner; and her hobbies range from shopping at Korea’s countless clothing stores, to learning traditional Korean calligraphy.

Now a seasoned international traveler, Christina has some words of advice for current high school and university students who are curious about learning abroad: “If you are interested in studying abroad, do it! You only live once and being able to live in and experience another country is a once-in-a-lifetime opportunity.”

“My friend showed me a quote that said, ‘In the alphabets B-C-D, B stands for birth and D stands for death. In between is C, which stands for choice.’ I never wanted to live my life in regret so I chose the U Asia Campus, and I’ve never regretted my decision.”