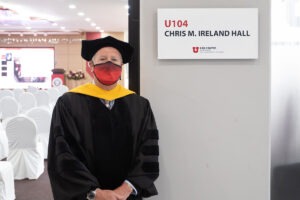 The main reception hall at the U Asia Campus, formerly known as U104, was renamed Chris M. Ireland Hall during the campus’s June 2021 commencement ceremonies.

“We sought to recognize Dr. Ireland’s dedication and service to the U Asia Campus community,” said Greg Hill, Chief Administrative Officer and Dean of Faculty. “As the heart of our campus, this space brings together students, faculty, staff, and community. It is fitting that one of the most-used spaces in this building now bears Dr. Ireland’s name.”

Honored by the acknowledgment, Ireland remarked that it’s quite special to have his name connected to a space that is designed for “meeting, gathering, and creating community. Everyone on campus passes through this place and that means a lot to me.”

Ireland’s connections to South Korea date back to the late 1990s when he and his wife Mary Kay Harper–also a research scientist–developed close friendships with Korean graduate students. The couple stayed in touch with the students over the years–watching them build their professional careers and reconnecting at international research symposia. Later, as dean of pharmacy, Ireland made annual trips to Korea with the late Sung Wan Kim (emeritus U of U Health distinguished professor of pharmaceutics and pharmaceutical chemistry and a distinguished professor of bioengineering) to strengthen connections between the U’s College of Pharmacy and South Korea. The personal connections led Ireland to develop a deep appreciation for the history and culture of the country.

In 2015, when the U was looking to develop its new campus in Incheon, it tapped Ireland for his experience in the region. He was appointed chief administrative officer of the Utah Asia Campus, overseeing its significant expansion over the next three years. He also supported a revitalization of the Korean Alumni Association.

“Korea has come to mean so much to us,” said Ireland. “Those relationships we fostered early on have endured and came to have an enormous impact on me and my family. Perhaps this space will nurture relationships for others that will become lasting and meaningful as well.”

Ireland joined the U as an assistant professor of medicinal chemistry in 1983. During his 37 years on the faculty, he established himself as a world leader in the field of natural product drug discovery—publishing extensively, managing a $25 million portfolio in extramural research funding, and training dozens of graduate and postdoctoral students. He served as chair of the Department of Medicinal Chemistry from 1992 to 1999 and as dean of the College of Pharmacy from 2009 to 2014. He retired this summer from his most recent post as Chief Global Officer in the Office for Global Engagement.